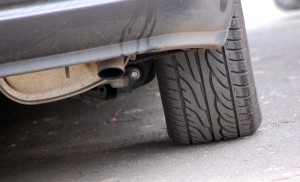 Cotswold council is to urge transport ministers to intervene in the row over noise from the concrete surfaced section of the privately operated Swindon-Gloucester road.The move follows tests by environmental health officers highlighting noise levels from the A419/A417 route.Later this month their findings go to full council with a recommendation that it urges roads minister Baroness Hayman to take action over the noise.Cotswold has been receiving complaints from villagers near the Gloucestershire/Wiltshire border since the new road, improved to dual carriageway standard, opened in December. Local people have twice blockaded traffic in protest at increased noise from a 14-mile concrete stretch of the road.Some £112M of improvements were made on the 52km route, bypassing Cirencester and local villages, under a design, build, finance and operate contract.This had been awarded to Road Management Group, a consortium of contractors made up of AMEC, Alfred McAlpine, Brown and Root, and Dragados.It was one of the DBFO trailblazers for which the Highways Agency was severely criticised in a recent parliamentary investigation. The A419/A417 DBFO cost the taxpayer at least £5M more than a conventional contract, the Public Accounts Committee found (Surveyor, 9 July).Simultaneous tests by the council indicated that noise from the concrete surface was 4dB(A) higher than for an adjacent blacktop stretch. A 6.5dB(A) difference was recorded when a test vehicle was driven past at a constant 70mph.Environmental health officer Ray Brassington also noted that noise from the concrete had different tonal qualities, which may be contributing to the noise perceived by complainants.He suggested that the HA should carry out its own noise tests which should include a frequency analysis. This could point to noise attenuation solutions such as acoustic barriers, which would be cheaper than the re-surfacing demanded by villagers.At a meeting last month with Cotswold’s leader and chief executive, the HA ruled out resurfacing, which it said would cost about £2M. Under the DBFO contract the HA would also have to bear the higher cost of maintenance if the specification was changed.But local campaigners claim that the tests support their claim that they were misled at public inquiry. The planning inspector accepted Department of Transport evidence that modern brushed concrete surfaces were no noisier than hot rolled asphalt. The choice of surface was left to the contractor.Campaign spokesman Julian Caunce said: ‘I welcome the council’s technical proof. It confirms the evidence of our own ears.’ He said the HA was now trying to hide behind the inspector’s report.A HA spokeswoman stressed that the issue was whether noise predictions made at the inquiry had been exceeded. These related to roads surfaced entirely in concrete or in blacktop. The council had compared noise from concrete and stone mastic asphalt, a quieter material than standard blacktop.The HA had already reported to ministers on the matter following complaints by local MPs, she added.

Quote ;’ The Government remains committed to the undertakings it gave in the 10 year Plan for transport including the removal of all lengths of concrete surface.’

1st April – Statement in the house of commons

The position of the Department of Transport was set out in by Alistair Darling, “Measures that minimise the effect of traffic on the people who live alongside roads is as important as trying to ensure that people can travel safely and reliably”.

Quote;’The programme set out in the White Paper shows the A419/417 Cirencester and  Latton by-passes have been included in the high priority category and scheduled for re surfacing in the period from 2004-05 to 2006-07 subject to the availability of funding.

Quote;’On the basis of current priorities and funding it is not likely that this work will be done in 2005/06.’

10th Feb 2006 Ben Webster writes an article in The Times

Quote;’Thousands of homes are to be blighted by noisy concrete roads for up to 30 more years after the Government secretly reneged on a promise to have them resurfaced with quieter materials.’ 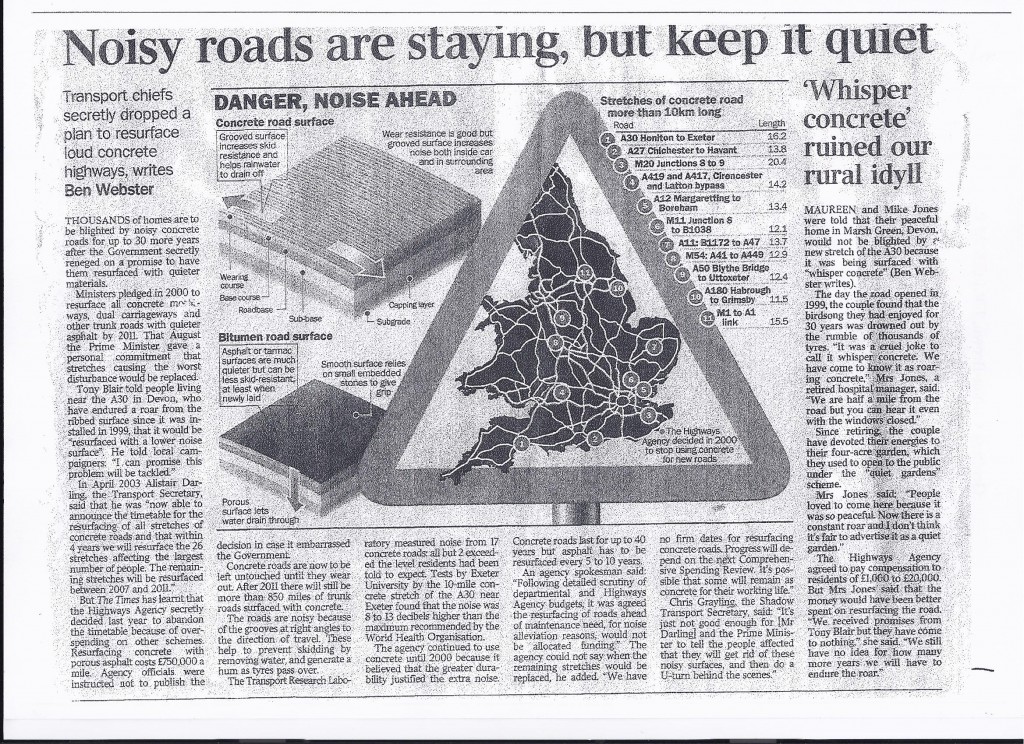 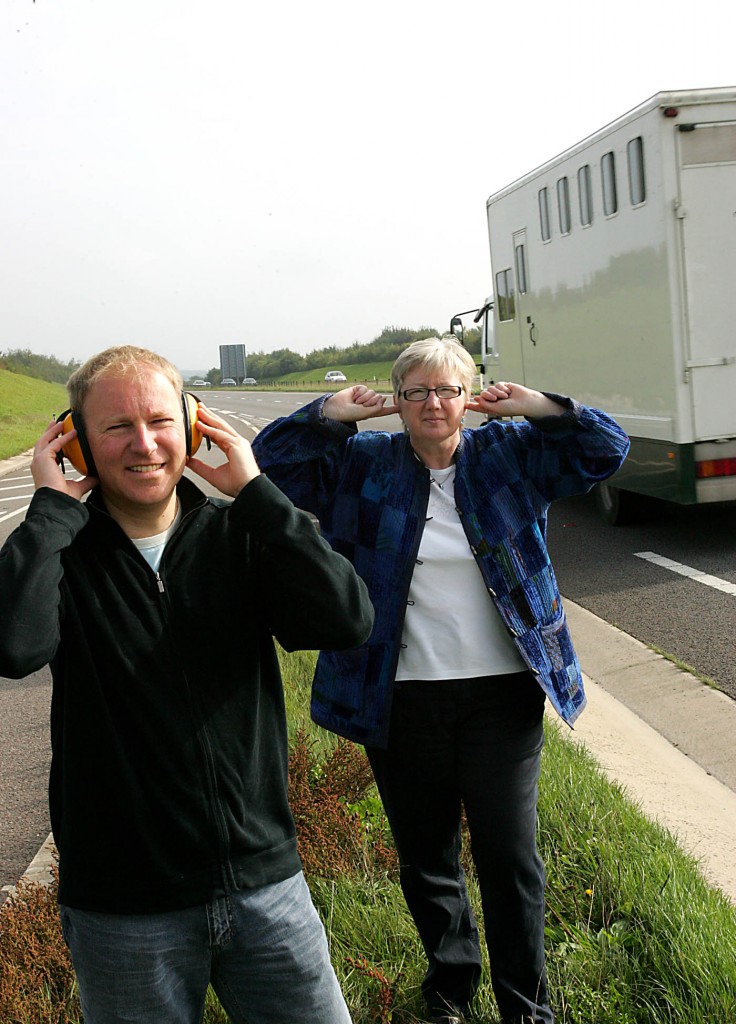 Campaign begins to pick up support once again 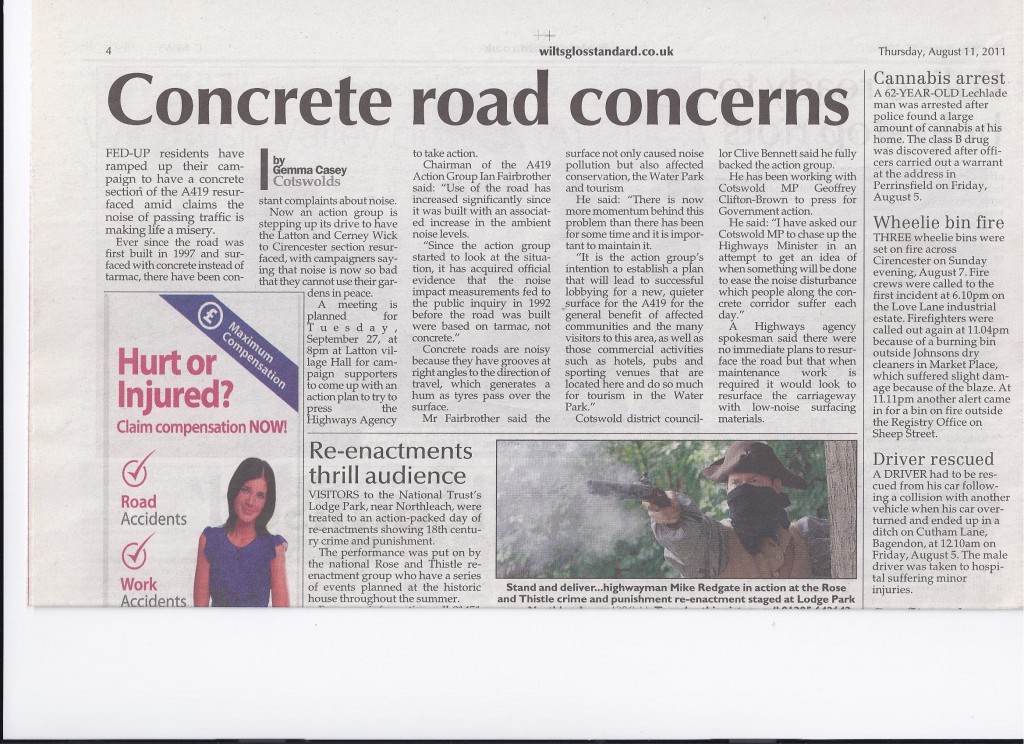 Local residents gather to discuss the campaign with several meetings held at Latton and South Cerney. The group is christened the ‘A419 Noise Action Group’.

The Latton Parish Plan Steering Group agreed that the data from the recent Household Survey clearly demonstrated that the majority of residents feel that the noise from the A419 is the issue that has a detrimental effect on their lives (with some evidence of harm to health and wellbeing reported).

The Highways Agency agree to conduct noise measurement research near to Latton and Cerney Wick. Results are due in March 2013.

The A419NAG Campaign is officially launched with support from MP for The Cotswolds, Geoffrey Clifton-Brown, A419NAG Chair Paul Hodgkinson, Cotswold District Councillor for the Churn Valley, local residents and businesses. Local newspapers, TV, radio, photographers and journalists have been invited to at an event held near to Cerney Wick, 8th February at 12 noon. 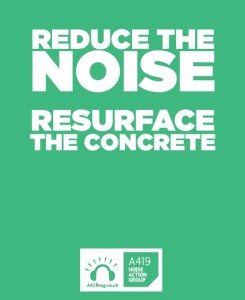